When you go in the world of Minecraft PE, on the left of the screen you will see a M button which, when pressed, you will see a graphical interface with all the blocks, items and other elements that exist in the game.

It is also very useful feature (the possibility of) Too Many mod Items is that when you install any modification on the game client, Minecraft PE, be it a mod or addon, all new features, items, blocks, and other innovations to appear in the interface of the mod Too Many Items. That is why the TMI modification is the most popular among the players of Minecraft PE, with its help you will be able to use all the items in Minecraft PE even in survival mode.

This is the first public version of the addon! There may be bugs and errors! For optimalnoi need the latest BlockLauncher! 
Click on the button [Effects] in the upper right corner of the screen: You will see a menu of all effects and the game. On the first page of effects will only show positive effects, and in the "Negative" - negative effects. To get any of the available effects you need to click on it, which will open a window with the effect parameters: Other features of TMI:
Go to tools by clicking the [...] button in the bottom menu interface TMI: Clicking on the Setting (settings), opens another interface with the game settings: 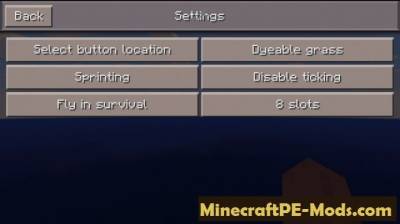