Creature Hunter mod adds in the world Minecraft PE 17 different types of hostile creatures, as well as a small Arsenal of weapons. Some creatures are just enormous: giant ant, bumblebee, hydras and snakes.

The mod is written in Japanese so all the items will be described I the Japanese language. As a result, we considered the mod is so broad, how do we do it. If you find something else let us know.

Mutants (Beings):
Some types of mobs will appear independently in different parts of the world at night. But if you don't want to wait until the night will come and will start to appear monsters, you can use eggs to spawn creatures that you can get in your inventory creative regime.

Let's look at all the new monsters that will now exist in the world of Minecraft Pocket Edition. The game will be added Hydra, giant ants, which we mentioned earlier. None of the mobs is not friendly so protect them.

That's a huge bumblebee. Bumblebees are quite long are being attacked, so they are a bit like spiders in nature behavior. If you attack the bee, he will try to sting you.

Here's the rest of the types of creatures you can meet in the world MCPE.

Weapons & Tools:
As you may have noticed the game has a new graphical user interface. Until we figured out how to use the buttons on the right side of the screen. Will saredites weapon, then press the auto transition button for a few blocks ahead. Basically it gives you the jump.

All weapons are pretty powerful, and most likely, these weapons are used to attack new monsters because they have the in your account is not enough health - you have something to match them.

Due to the fact that everything is written in Japanese, we could not translate the full list of the weapon id and the crafting recipes, because this is all very confusing. All new types of weapons you can get in your inventory creative regime. 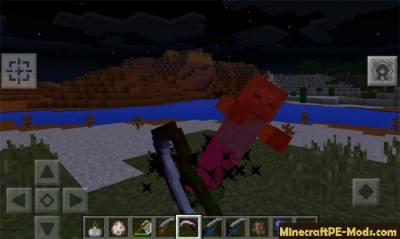 Also in the game there will be one very interesting thing: "bug-catching" ("excellent fishing"). If you click on the grass network, you will be able to catch some bugs/errors. We haven't figured out what to do with found bugs/errors. There is an assumption that with the help of bugs you can feed your monsters. If you found the use of bugs, please let us know in the comments. 
Install Creature Hunter:
Download mod.
Start BlockLauncher Pro..
Click on the Allen key.
Go to "ModPE Script".
Enable mods and click "Add".
Now you need to find the downloaded mod in the file system of your device and click on it.
Mod is installed and you install a texture!

Download texture.
Start BlockLauncher Pro..
Click on the Allen key.
Go to Settings BL.
Enable textures.
Go to Texture pack and click Import.
Now you need to find the downloaded texture pack in the file system of your device and click on it.
Mod and texture set in the game.
| Tags: