How To Build a house (part 47) in Minecraft PE 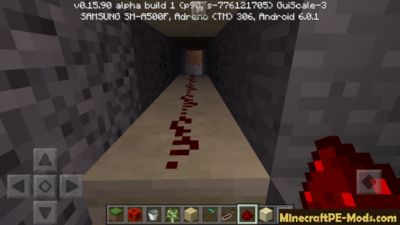 Install temporary blocks of Sandstone, which closes the water running farther than necessary. We will test the mechanism. Turn the lever in the active position: Next, I noticed that the reverse effect is required to return the lever to the off position and then on again to activate it. It is not very convenient, so will now look for a way out. Dig on our leverage wider by 1 block space, and now I'll explain why: There we install many repeaters that are installed on the maximum delay. What does it do? We will use the button, which will go a short Redstone signal in excess of 2 ways. The first way - our first built a path out of Redstone, the second - repeaters. (Attention! Necessarily the first track set to 1 repeater at minimum delay, so that the mechanism is not locked and left in the off position). So, first to distributors will reach the first signal that shed in the garden water, and then from the repeaters will reach the second signal, which will stop the water start. The screenshot above shows that water at the touch of a button begins to flow, and then a second later stops. Concealed mechanism. Further to more carefully limit the water path, we will use the pressure plate that will not allow water to leak further than you need to: