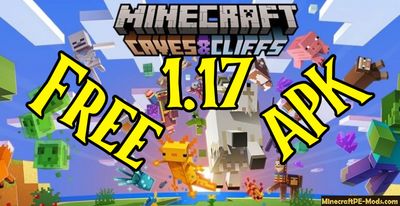 Minecraft PE v1.17.41.01 - 1.17.34.02 has become one of the biggest updates in recent times, which contains a lot of new content for generating caves and cliffs biomes. This app is available for download on Android OS, so you can add more features to MCPE that will make boring mining a very exciting adventure. Now the caves will be filled with scary monsters, new precious ores and even huge crystals.

Among the main features of Caves and Cliffs Part 1 and Part 2, it contains several new creatures, some of them are peaceful and even useful, while others will be extremely dangerous and can attack you at any opportunity. Additionally, the player can meet plants that generate underground groves, use amethyst in mechanisms or decorative purposes, mine copper, and also get achievements for completing challenges, but let's talk about everything in order.


The developers from Mojang together with Microsoft took about a year to test all the innovations in the gameplay, the game engine, as well as to optimize all possible combinations of mechanisms from both old and new blocks. Through the use of professional testers and regular players who have served feedback, we managed to speed up the process of detecting bugs and glitches, so now you can play in your favorite game world without fear that the application will suddenly crash or freeze.
Release date: October 28, 2021
Recent version: 1.17.41.01 Full Part 1 (Part 2 will be released in version 1.18.)
Platforms: Android, Windows 10, Xbox One Let's start with the axolotl, which looks very cute and somewhat like a friendly fish, but it specifically lures you into its trap. As soon as the player is in the water and gets close to him, you can be attacked. You can use this as a pet, but you will need to build a strong aquarium to do this. Goats are also very non-aggressive, but they can be dangerous when they start to take a run at the player. Powerful horns can do a lot of damage and also it will push you away for more than 5 blocks, so you need to make sure that the character is away from the abyss or deep pit. These goats also jump around the mountains like parkour masters, so this is one of the fastest mobs that can only be caught by trickery, such as using bait and traps. 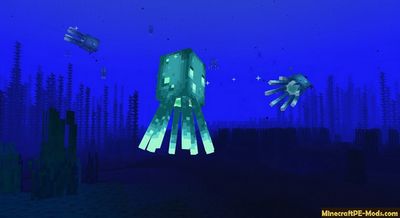 The Glowing Squid is a mob that was added as the winner from the voting during the Minecon 2020 event. You can get the glowing ink that you will need to craft glowing blocks or items. It also perfectly decorates the aquatic world, which allows you to build beautiful underground bases. Underground groves are generated in places where special trees grow. This tree is called azalea which has powerful roots that penetrate deep into the soil. In such places, beautiful openings are formed that are covered with moss, other small flowers and bushes. Additionally, you can find a small and large drop leaf, a pointed drop stone, cave vines and glowing berries, hanging roots, ingrained dirt, a moss carpet, and even a whole moss block. These are excellent additional decorative materials that can be used as both an exterior and an interior for your home. 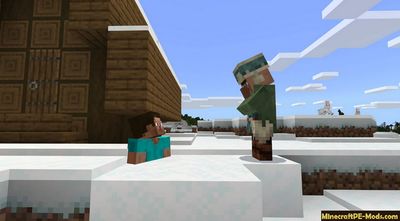 Among the main features are also listed luminous lichen, powdered snow and shale blocks, as well as amethyst geodes! All this is used to create one of the most useful devices - the telescope. Now you no longer need to install Zoom modifications or enlarge the image using the UI settings. You can also craft a more stylish updated glass with a tinted effect that will allow you to see everything that is happening from the inside, but from the outside it is not transparent, so that other players will not be able to look inside the room. 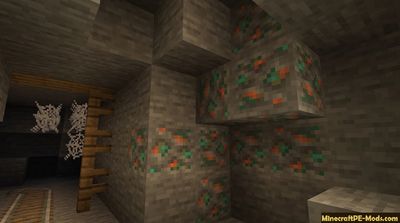 Additionally, by exploring the updated cave biomes, you will be able to find new blocks that are copper ore. This material is used to craft the body of the telescope or to create special mechanisms whose main function is to be installed on the roof of the house and catch lightning. Next, the energy charge passes through the lightning rod into the ground or feeds your mechanisms. You can also create decorative buildings made of copper, because it has a very interesting feature associated with the oxidation of copper in the rain. So, gradually, the gold-rich copper will turn into a green block.

Next, we'll look at the full list of changes, hidden features of blocks and mobs, how it works, and where to use the new blocks.