In this guide I will tell You about this new block, like a beacon in Minecraft PE. 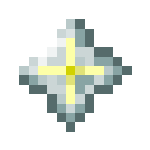 Beacon is a special unit which under certain conditions gives positive effects to the player nearby. The crafting of the stars of the Lower world, which falls in the murder of Wither.

Let's start with the installation. To activate the beacon you want to place a pyramid of precious blocks under it (diamond, iron, emerald, gold blocks). Each level of blocks gives the possibility to activate new effects: