Pocket Heroes mod — this modification adds in the world Minecraft Pocket Edition 21 the hero in each of which you can become wearing his suit. The mod adds bosses against which you will need to confront in order to seize all these costumes and comics. In the list of available superheroes, this mod includes: Deadpool, Superman, Spiderman, Hulk and many others. All Superman have super-powers and when you wear the costume of one of the superheroes, you automatically become the owner of super power!

How to get a superhero costume?
In workbench, create a Start Something Epic and hit that item on the ground to get a comic book. Blank comics can be used to create full comic books. 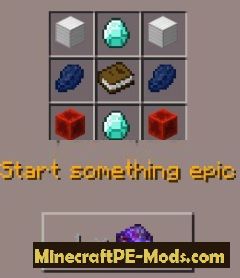 You need to get in the creative mode inventory


Hit the ground full book (in this case Captain America # 1 - the Red Skull) to fight the first boss villain.

For every dead villain you get the book. The second boss of the Winter Soldier. It spawned a book and kill him to get the third book: Captain America # 3 - the civil war. In the third, final fight for getting super armor Captain America you will have to fight against hordes of mobs, so make sure to be well prepared for this fight.

In one of the mobs you'll be able to pick up the suit and the hook of Batman, which he a drop. The same mob will drop the comic. Use a blank comic strip, as before, to spawn the next mob bosses and fight with them to get 22 different armor set of superheroes.

Batman
Put on a Batman costume and feel all its power. You will instantly receive super-speed, super-strength and super-jump. You will be able to fight crime day and night, as soon as I get access to night vision. Use the grappling hook to move around with ease.