Bosscraft PE mod — this modification adds in the world Minecraft PE five different bosses and a few new monsters which are minions of the main boss. Also the mod includes new items and elements with which you can summon bosses and crafting new weapons for enhanced protection.

If you are looking for a mod that will increase the difficulty of survival in the world of Minecraft Pocket Edition, this mod definitely what You need!


There are five bosses that will be added to the world of Minecraft PE. Unfortunately bosses are unable to be generated in the world, so You will have to create with the help of special element. In addition to the bosses in the game will be added and other characters. New characters or mobs will be expected to be generated in the game. You have to kill these characters in order to get special elements with which you will be able to call their leader — the Boss!


Let's look a little review on each of the bosses.

Fire warrior
Fire warrior millet is an ancient master and Lord of the Void. If you intend to fight this boss — we highly recommend You to use the most powerful equipment. This boss has 600 HP of health.
This boss have: Sword of Fire (id - 910)

To summon a boss you will need the following items:

You can get fire killing spider.

To get Nether Orbs — You have to kill fire spiders. When you have 20 balls hit on the ground element of the Nether Scroll to spawn mob.

Rogue-master
This boss has the ability to multiply and summon minions, which will come to his aid in the fight against you. This is certainly one of the most difficult bosses, which are present in the mod Bosscraft PE.

You will need the following items to spawn the boss:

You can get by killing the killer.

Nether Orbs fall from the assassins who are born in the world of Minecraft PE in a random order. When you collect twenty balls — you can click the Scroll element of the Forest on the ground to spawn the Boss. The grim Reaper
Boss "Reaper of Death" is personified force of death. Not only that, the boss looks pretty weird, he would still encourage his assistants, who will help him fight against You.

From boss you can get: Midnight scythe (id 911)

Can be obtained by killing Ghost.


To get twenty-Necro Orbs — You have to kill ghosts to catch yourself in the world of MCPE.

The Scorpion king
This boss is the king of all Scorpions. It is much more Scorpions, and more vicious.

You can get after killing the Scorpion.


To get twenty items Desert Orbs — kill the Scorpions.

Mega Block
This boss is a giant block that has the face of a creeper. This boss is highly to jump up in the air and when you land on will — he will do explosions. At the same time, he will throw TNT at You that will explode.

You can get killing the Mega block.


To get the balls, look terrible blocks mobs and kill them. 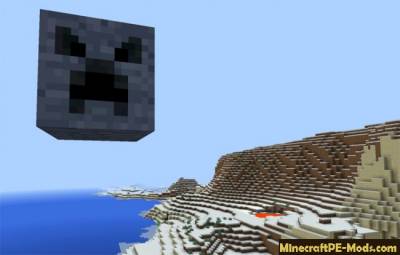 After you killed a few bosses, it's time to craft new items with obtained things you got by killing bosses and minions

The subjects of the soul can be used for hold new abilities, for example, fire.

How to install Bosscraft Mod?