Elemental Swords mod adds 15 new swords in the world of Minecraft PE, each of which has its own special properties and abilities. Each sword has a specific power that was embedded in the sword in the time of the creation of the sword and his power is fully consistent with its composition.

Elemental Swords mod adds swords that has a natural disaster - it will be completely under your control. For example, the sword of the storm is going to throw your enemies, or just animals in heaven, then they will fall to earth and die from hard hits. Also in may there are swords that will set fire to mobs within a certain radius. 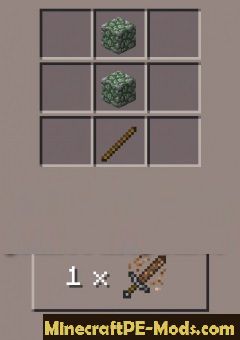 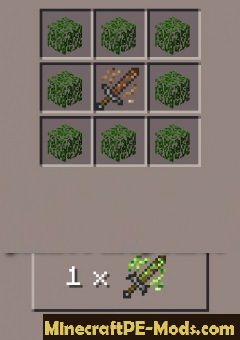 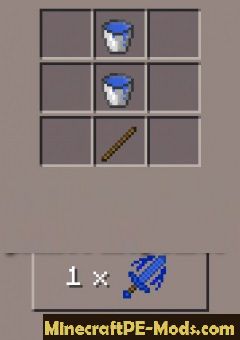 
For activation over the potential of new swords that they have, please click on the icon in the lower right corner of the screen, and then release it. (Icons appear when you take the sword in hand)

Sword of fire:
Sword of fire is probably the most powerful sword in all these swords. The fire sword causes a powerful wave of fire that spreads in a radius of 15 blocks and ignites all mobs and animals that were in the area.

Air sword:
When in air hit the mob with a sword, then the mob goes completely under your control. Mob will be steamed above the earth until you do not omit or will not leave. To throw the mob, You will need to raise a little higher and click on the icon of the cloud. If you want to put it on the ground then lower it as low to the ground and hit on the icon of the cloud. Sword of the storm:
This sword gives you more power over others. With this sword you will have power that is similar to a tornado. The sword throws mobs that are in range of the sword high into the sky, then they fall to the ground and die. Lava sword:
The sword shoots lava at mobs from the sky with a precise strike of fireballs that set fire to mobs and they die. 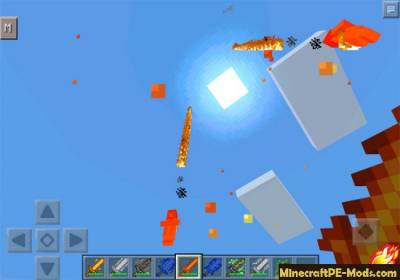 Sword of the ocean:
When you click on the water icon in the lower right corner of the screen, then the sword shoots water at enemies. This sword is inferior to most of the swords in the mod Elemental Swords. Sword of the jungle:
This sword allows for a split second to toss mobs into the air to take a breath after huge crowds of mobs that attack you. Sword throws mobs that are nearby within the radius. The pop mobs in the air is not deadly.
Sword of water:
Adds 6% extra damage during attacks by the mobs.

The sword lands:
Adds extra strength to the attack.