This guide was created for players who want to know everything about the mobs. Here I will tell You about the witches in Minecraft PE.

Witch applies to hostile mobs(Attacking player, even if he appeared in the zone of their visibility).

The witch is a hostile mob, differs from others in that it uses a battle potion. This is one of the few mobs with ranged attacks.

Find the witch in the normal world is not so simple. Witches appear in the normal world on any solid block with a light level. One witch appears in the witch's cottage in the swamp (to find such a cabin You will be able with the help of our seeds). A villager can turn into a witch if the distance is less than 5 blocks from it struck by lightning. The witch is similar to the pale village resident with a wart on the nose and in another garb. She is wearing a purple and green color, and high black hat with a green buckle. As I said, the way to attack the witch special. The same can be said about the drop. After killing the witch because it can drop empty vials, Glowstone Dust, red dust, gunpowder, sugar, spider eye or stick. From witches fall from 1 to 3 types of things (0-6 for each item). But there is a limit — a maximum of 6 items dropped. Of witch can beat anyone used her potion, if you kill her in that moment, when she drinks it. 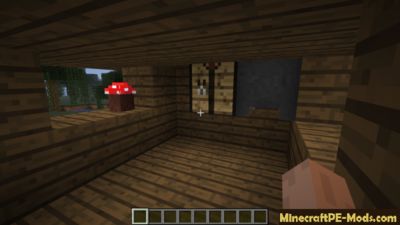 To effectively fight the witch, you need to know more about her. The use of the following potions: potion of slowing a potion of poisoning, and then the witch throws the enemy potions of instant damage and a 25% chance, weakness, but if the potion poisoning will end, she'll drop a new potion, and then return to the potions damage. The witch is immune to potion poisoning, slow or instant damage. When the witch drinks the potion, she lifted the nose, and in her hands you can see the bulb from under the potion. The witch can't attack while drinking a potion that makes her more vulnerable. To combat witch is preferably ranged weapons such as bows.

A list of potions that can be knocked out of witch:

And, as usual, a few facts: