This guide was created for players who want to know everything about the mobs. Here I will tell You about Ghast in Minecraft PE.

Ghast applies to hostile mobs (Attacking player, even if he appeared in the zone of their visibility).

Ghast - hostile mob of a large enough size (4x4x4 blocks), with a large attack range. Attacks with fireballs that looks something like a jellyfish. Explosion fireball can set fire to blocks. If the explosion affected the portal to the nether, the portal shuts down. After the death of Ghast makes a sound similar to the sound of a man gasping, and dropping a tear Ghast and gunpowder. 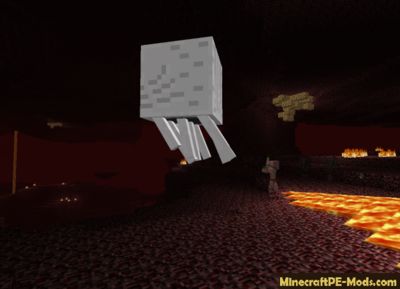 Ghast can appear anywhere on the Bottom of the world, if there is enough space, will only spawn on solid blocks. If the surface size of 5x5 blocks, spawn will not occur. Rarely can spawn near the portal in the regular world.

Ghast fly at Lower world and publish such sounds that it seems like Ghast is crying. These sounds can be heard equally loud from any distance.

Ghast is able to notice a player with a sufficiently large distance. When you attack the mob opens mouth and eyes, uttering a sound. To avoid clashes, the need to hide behind an obstacle, because a gust will not chase the player, if you lose sight of. As I wrote above, Ghast shoot fireballs, but these balls can reflect any shot, even hand. Already thinking about how to kill Ghast his own weapon? It is quite difficult, because the projectile should be reflected at the desired angle.

If two flying fireball face each other, one of them will explode and the second will fly in another, random direction.