We recommend that You install this update of the game because it carries a lot of fixed bugs of the previous versions of the game. Release Minecraft Pocket Edition 0.15.2 has already taken place for all platforms, so go for this version, and soon will catch up to 0.15.2 servers MCPE.

For those who still do not know about the major innovations in Minecraft PE 0.15.x — in this version now has support for Realms. Servers Realms can be played by players with different gaming platforms. For example, Your friend plays on the PC version of Minecraft, and you're on iOS or Android. You can also take a 30 day trial use of the function of Realms, then You will be prompted to buy it. Servers Realms can play up to 10 people. 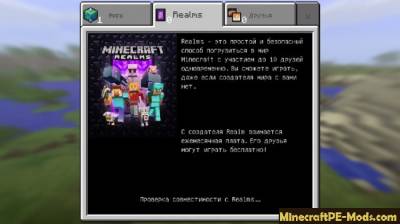 As well, smaller but really popular innovations: pistons, temples in the jungle, new types of villages, horses, riding horses and other animals and much more!