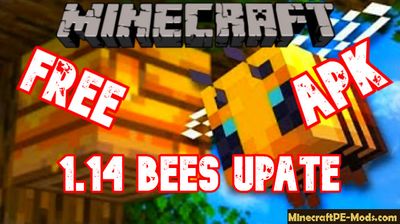 
Minecraft PE when will 1.14 come out? This will take place simultaneously with the release of the full version for Java Edition, most likely you will be able to see the full version in end-December 2019.


Now we know all the features for Minecraft PE 1.14.1, some of them are already in 1.14, but the final list can be announced after the full release of the game. Now we can try more than 80% of all new features

Bees - this new neutral mobs which have unique behavior scripts. They can build honeycomb, go in search of nectar and return to the home. After a while, the honeycomb will increase and you will be able to collect a honey. Bees will be passive if it rains and also if you are nearby. Hives and Nests are a new block that will be generated in biomes where there are glades of flowers. There is also a chance if you plant a lot of flowers then a bee hive will be generated near it. You can use scissors to collect honey and before these do not forget to build a fire somewhere close to calm the bees.

Honeycomb and Honey Bottles - a new opportunity to collect honey, just use an empty bottle, but note that the level of the hive must be at least 3. You can also use dispensers to cut huge chunks of honeycomb and store it somewhere in the house and then use empty bottles.

Honeycomb blocks is a new block that you can build by collecting a huge number of honeycombs. Honey can be placed in a chest or put on the table as a cake. Honey is an excellent source of energy and you will have enough for a long time. Honey blocks are unique blocks with a huge number of new features, for example it slows down the movement of all mobs and players and makes it impossible to jump. You can use this to create parkour maps because the player can slide on the honey block. If you use this for Redstone, then the honey block will stick several blocks around itself and you piston will pull several blocks at once.