After the release of several new versions of Minecraft PE, we saw a lot of the work done on the part of Mojang. The team continues to please us with good updates and modifications to the Minecraft world. The pace will soon be able to download Minecraft 0.18.0 for Android.

Analyzing the periods between releases, you can name the approximate release date of this version: February — March 2017.

Now let's talk about the content in Minecraft PE 0.18.0.
The developers have planned many features from the PC version, which may be added in Minecraft Pocket Edition 0.18.0.

The Ender Chest is a block that is similar to chest, but it has special properties. 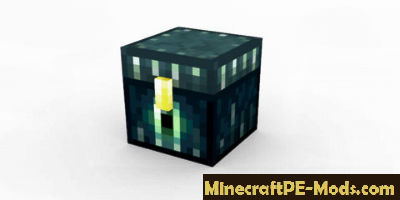 The main feature is that if all the items put in this box, they will available in other such chests. In multiplayer, each player will only see their contents of the ender chest .

Its capacity equal to the capacity of the usual of single chest, that is 27 slots.
After its destruction will not fall out of things. To re-access them — just go to another ender chest.

Banner — block the height of two blocks. It can be placed in several ways: on the block above or the side, like a plate. Used as decorations on the walls and elevations. Mainly used as a distinctive sign of their guild and the castle.

Audio player is a special block that is used for playing records found by a player. Records — items that are used the audio player and play a variety of music. The album will drop from the creeper if it will kill the skeleton. You need to distract the creeper on itself, so that it follows you, and then to go so that was a creeper between a skeleton and you. The skeleton tried to shoot, but will cause damage to the creeper.

Also, if you find a dungeon, with a probability of 8% will be records in the chest.

Canyon — the structure of generation of the world, which is usually located underground. Sometimes you can meet them on the surface. Inside the canyon are usually flowing lava or water. Due to its large size, is often found with abandoned mines, dungeons, and other canyons. In the canyons there is a great chance to find useful resources.

They were not added to the game 0.18.0 for only one reason — the inability to generate the available methods. Mojang focused on working with the new world generator. I hope that the team will succeed.

Do not pass go, participate in the vote. Also leave comments. We would love to see the view of every visitor of our site!