In Minecraft PE 0.17.0 appeared End World and Endr Dragon in it. Fighting him is one thing, but to ride another. This addon will allow full control of this mighty dragon. His massive power will tumble down any enemy without any problems.

The modification will work for all future versions of MCPE after 0.17.0 version. As you know, will soon be 1.0.0, maybe 0.18.0 - we don't know for sure, but we know that the addon will fully work on these versions.

How To Ride Ender Dragon?
Many people probably already thought, with what items it is possible to control this huge boss? The answer is simple - using a diamond sword. If you study the history of Minecraft End World, then it will become clear that the creatures of this world to be afraid of the diamonds, the more weapons from this precious stone.
According to the developer, the expansion pack is not yet completed in terms of the placement of the player on the dragon. On the side will look a little crooked, but in first person it works fine. 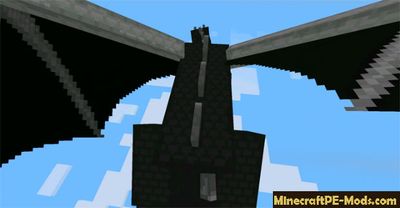 If you are playing in survival mode, then somehow in the End you'll need to go to near to the dragon and quickly click on the Mount button. It's easier to do in a mode of creativity, because you can spawn the dragon in the right place, and then quickly ride before it takes off.

Which of the updates did you like the most?
Results | Polls archive
Total of answers: 2057
| Tags: