This seed is well suited if you want to plunge into the world of MCPE survival with a small catch. Slightly moving away from the place of occurrence in the world of Minecraft Pocket Edition, you will find the desert temple. In the temples you will find many treasures that were hidden in the vaults of temples. This is a pretty good way to start your survival.

After you appeared in the world of Minecraft PE is turn around and walk forward crossing marsh lake. 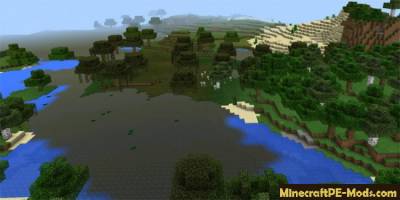 After a while his way you will see two desert temple. Since they were generated very close to each other, they look like one big temple.

In each Temple, usually there are four treasure chests. With two temples you can collect as many as eight chests — and it's for the first few minutes of the game. It's very cool! The temple has colorful half — destroy it to get into the dungeon of the temple, where the treasures are hidden. Be careful when you go down to the chests — don't stand on pressure plate, it is a TNT trap.

Of the eight chests, you can get the following list of elements: