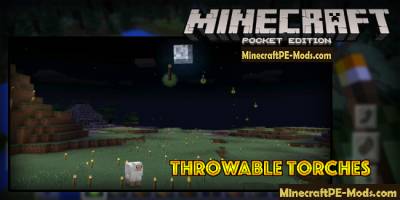 Feature of sticky flares that you can throw in the tens of meters on the wall or on the ground — and they will stick. It really is very useful and convenient mod!

How to throw a sticky torch?
Throwable torch — it's almost the same standard torch Minecraft, but it has a sticky feature. To get a normal torch need torch to mix with mucus — this can be done in workbench.
(x6) – 6 torches + 1 slime.

Throw torch you will like snowballs or balls of mucus. Look in the direction where you want to throw the ball, and press your finger on the screen, as usual, to throw!

In the screenshot below we are 5 seconds casts a Throwable torch" in a certain area, and as you can see, the area which is illuminated has a fairly large scale. With conventional torches you would not have covered the territory on such a scale for 5 seconds.

In this way, you can quickly illuminate your way. You can throw sticky torch on the ground and on the walls. Where the only does not stick torch is the leaves of the trees.