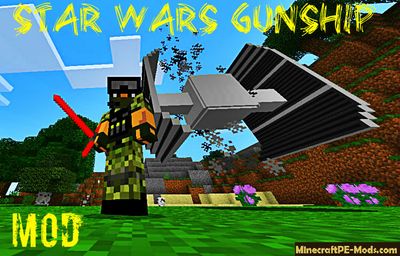 Star Wars Mod For Minecraft PE is a addon that can add a huge amount of guns, battleships, clone soldiers, laser swords and much more.

Modification will appeal to many players. It can be installed on the game client or on the server. With the additional arsenal of weapons and aircraft, you can set different battle between the clones and the rebels. How to get laser swords and Gunship?


All will be added 5 new laser swords are the most well-known jedis and the sword of Darth Vader. To get them, you just need to craft one of the standard swords and you get laser, it's because they will replace the standard swords. As for the Gunship, you need to descend into the Nether World or use the eggs to spawn Blaze. So instead of the mob, you will see a real clone battleship.