Very interesting mod called Skygrid Minecraft PE with which you can generate a celestial grid of different blocks size HH blocks. These bars are composed of a variety of blocks and you will have the opportunity to indicate what it is just edit a certain file.

The main task of the mod Skygrid is a survival, or rather you need to survive as long as possible, and to do so not necessarily alone, so call to his friends, and then to survive in the mod sky grid for Minecraft PE will become even more interesting.

Generation of the celestial grid

That would begin to generate heavenly bars with a mod for Pocket Edition Skygrid you need to create a super flat world, because if you try to create it on a normal map, then you probably will throw it out or the game freezes. So we do a map, as shown in the pictures below. 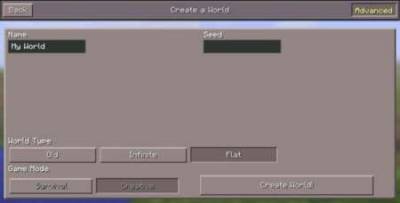 Next you will need to find a few sticks, but since the created world is completely empty, you have to run survival mode and using the TooManyItems mod and add to your inventory a large quantity of sticks - 280 ID.

After you will have a certain number of sticks, just take one of them in your hand and tap her on the ground and at this point will be regenerated the same Celestial Grid in the MCPE game. How to add your blocks?

To add, remove or modify blocks of which the Celestial Grid, you need to open Notepad file SkyGrid.js and change the values or add new in the fourth line by entering in there ID blocks.
| Tags: