If you like cartoon Pokemon and the universe which was shown in it then Minecraft PE mod PokesSimulator (Pagesimilar) you will love it and will become one of the 75 pokemon and get all of its abilities. Each pokemon has its own unique abilities and some of them are much stronger than the other.

All pokémon in the game Minecraft PE will be divided into 5 types which will determine what abilities will have a pokemon and how it will look. Each pokemon has its own unique appearance and will not look like the other pokemon from other classes.

Next you need to decide what class you want pokemon to turn and get its capacity, for this mod there is a whole list of commands to help learn the names of all the pokemon and turn them in by typing their name.

If you will enter commands from list1 to /list15 you will not receive a large list with several name the pokemon, you need to choose and enter a command such as /pikachu after which your character will turn into Pikachu. What would you have been more clear, below we consider one pokemon from each class.

In a normal class is like this pokemon, as Golbat, which has a blue coloration, large size and will hover above the ground. A feature of this class is the ability to cut leaves and grass, and then pick them up. To fire class, in the mod of pokemon for Minecraft PE is Aerodactyl - has large wings and has many traits similar to dinosaurs. For rock and steel so it can set everything on fire. The best known representative of this class of water - Blastoise that looks like a big turtle and their attacks will be to use water. He has the ability to spit water and create a water barrier that will repel all enemies. As you know this class the most famous pokemon is Pikachu is a pokemon not of large size, covered with yellow fur. This pokemon can cause a shock and take a lot of HP from his opponents. This is the last class in the mod PokesSimulator (Pagesimilar), the main representative is Bulbasaur - not a large creature that moves on 4 legs and is able to create traps out of grass that will immobilize opponents. 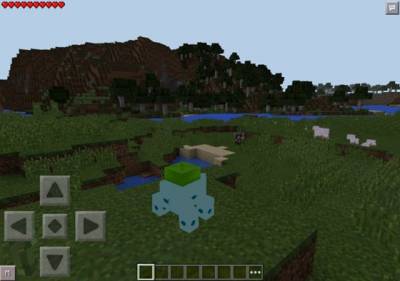 Well, now you know how to become one of the 75 pokémon in the game Minecraft PE with mod PokesSimulator (Pagesimilar).
How to install mod Fruit World - fruit new?: