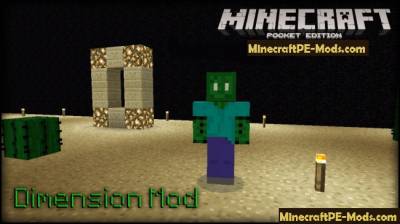 Dimension mod — this modification adds in the world Minecraft PE 7 new dimensions, in which you can navigate by using new types of teleports that come along with the mod Dimension. In each dimension You will have to wait for the boss who will try to hurt You. With each world you'll have something to carry their accumulated belongings that are stored in the trunks of these measurements.

How to move into a new dimension?
To get to some certain dimension of the seven available — You need to build a suitable portal which will only differ by the composition of the blocks of which it consists.

The portal has a non-standard proportion, and design it just a little different from the usual portal to the Lower World. When You built the portal (one of the available description and screenshots below — click on the bottom middle block is a lighter, Similarly as in the normal portal, but in this case happens once teleportation.

How to get back with the measurement?
After you moved to another dimension, You will find there a chest with things and teleport, which had previously been prepared for Your return home. You just click on the bottom middle block with the lighter and moved home again. In each dimension You will have to wait a little surprise.

Measurement of green
When you get to this dimension ahead You will see a green world. In this "colorful" dimension You will encounter a boss that has an engraving of the earth and grass corresponding to the same dimension. The Dimension Of Hell
This dimension has the usual elements of Hell (the Lower World). The world consists of hell stone, besides the third part of the world is a huge pool of lava. A feature of the world that you will meet all the famous Herobrine. In the chest you will find a few useful items that You may need in the future. When you move in this world You will have to wait for the Boss of this world — "the Cactus guy". The boss will make every attempt to kill You so You must fend him off and defeat him. Then you will be able to reach the chest and take with him all the valuables. Dimension farm
In this dimension You will find a huge farm — like area of farms in Minecraft Pocket Edition you did not know! In this world there is a track that runs through the entire processed lines of the farm. In the chest you will find seeds which You can use for planting. In this world there will be a boss — Angry Chicken that will attack You! 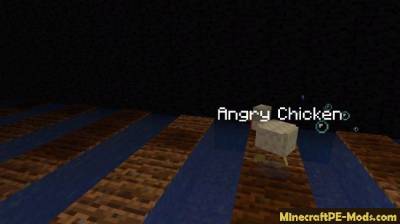 Dimension of Ice
This is a pretty interesting dimension, You will have to wait for the boss who is guarding a chest. In the chest you will find a few useful things that can be useful in the future. The boss has an interesting texture, something resembling a snowman, but it's a disguise — he will attack You, so beware. 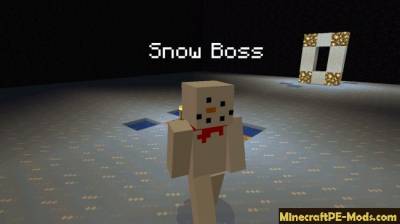 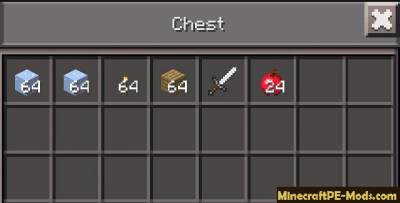 As the mod author Dimension, namely Dr Lazuli exist in this dimension — it will not be deleted from the history of mod. 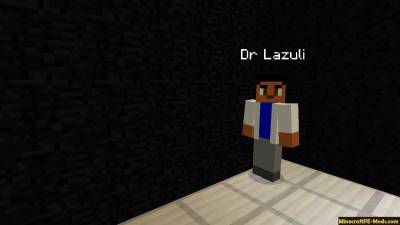 The world itself no especially not profit, except that You can pick up armor and some tools from the trunk, which is in this dimension.