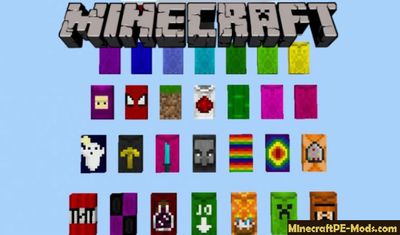 This Minecraft PE addon will make it possible to craft more than 35 new capes. It will be created on the basis of the banner, but adding to the recipe crafting some other items we get a beautiful realistic cape that can be worn behind him.

New features of Minecraft 1.12.0 give the chance to attach the mob to the player's body and thus it is possible to change the 3D model of this mob. It will follow the player in such a way that it looks like a cape. Thanks to the advanced features for creating Addons in 1.12.0 version, it is now possible to craft new items. Use this to create new capes.

How to Craft and Wear a Cape?


Once crafted cape to throw on the ground, a behavior will cause it to gain a foothold on the back of the player. Once you throw another cape, the old one should just fall to the ground and not move.

In order to craft a new cape, you will need some items:

How to dye the cape?


In order for the white banner has become a stylish cape with a variety of designs, you'll need to paint it with the dye. Depending on the color of the dye, your cape may change to a certain style: In addition to the usual painting in 35 colors, it is possible to craft a completely unique cape. To do this, we need to use new ingredients in crafting: