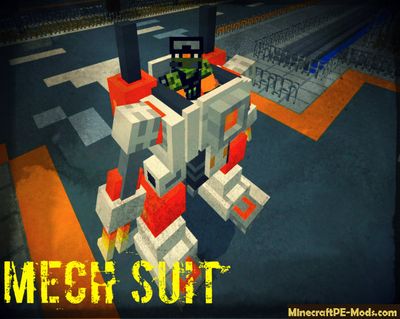 Before you mod, which is able to add real military mechanical suit in Minecraft PE. Such costumes were used in many movies and has demonstrated its combat power. Mech Suit has different types of attacks. That is, you can fight at long range or at close. The suit is equipped with a large number of rockets, and also has powerful hands that tumble down to the ground any monster.

How to get a Military Mech Suit?


Construction of army costume does not take much time. For this, you need just 4 iron block and 1 pumpkin. As you may have guessed, it will replace the Golem. For this reason, his behavior is a bit like a friendly mob. After you are done with building, you can climb into the pilot's seat. Robotic suit will stand still as long as you don't pick up the batteries (Egg).