The Legendary Beast PE mod — this modification adds in the world Minecraft PE new bosses, against whom You will need to fight. Each boss has their own unique skin, unique abilities and weapons, which you can get after his death. Some weapons need bosses to fight other bosses because the standard weapons MCPE is not in force to resist the powerful bosses that have adds mod Legendary Beast PE.

When you call the boss, will be generated a unique structure, is the arena on which the battle will take place.

This boss is one of the most heavy, which is not so easy to kill. Whenever you'll touch in the boss — You'll be ignited. This is not a good feeling, but to kill him You will need in some cases to touch him. 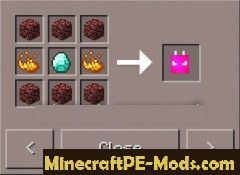 If You manage to defeat the boss — it will fall to fire wand (Fire Staff). Hold "Fire" in the lower right corner of the screen to use the fire bomb.

Ender Lord has a tendency to teleport. So every time you think his attack, he can teleport in space to any point, with the result that Your shot will be cancelled. 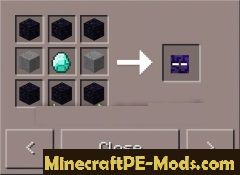 If VM manage to kill this boss, he will drop the wand Ender (Ender Staff). If you pick up the stick, and then press the buttons — Ender Pearl (in the lower right corner of the screen), you will shoot small balls. The feature of these balls is that when you shots them in what ever direction where it will land, and there you are teleported.

This boss has an immunity to weapons, including a diamond sword. However, You have the fire wand (Fire Staff), which you can get after killing the Fire Demon. Fire wand you can use against this boss to defeat it.
Lightning Spirit (id - 607) - prescription is unknown, use the Toolbox or Simple Commands to get it!

You into a God of Thunder. The wand will allow You to summon lightning at any time, at Your request. Just send a lightning wand at the ground and then click on the button in the bottom right of the screen to trigger it.

Elf assassin is a high and terrible creature with a bow and arrow. It is very fast, so make sure that You will be able quickly to finish with it before he'll do it first You (have Your mind murder).
Eld Hunter (id - 609) 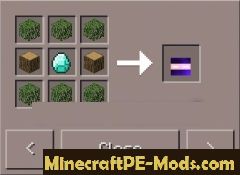 After his FR, he leaves behind a toxic gun that shoots poisonous arrows.

Once you have created the beast of the snow, for it will generate most of the snow structure. The structure is an arena with which no benefit — You are in isolation. At this stage You have two options: kill the snow beast and stay alive, then get off the stage or to die, to leave the stage. If You manage to kill the boss snow it will fall to ice stick (Ice Staff). Ice stick can be used for throwing snowballs at Your enemies. Snowballs have the effect of slowness, because when you will get them over the mobs they will slow down.


How to install Legendary Beast Mod?