Grappling Hook mod — this Minecraft PE modification will make with ordinary fishing rods "real" climbing hook. Thanks to this device you will be able to climb the highest mountains if you live in the city — to climb on tall buildings or even skyscrapers. The principle of operation of the hook relies in the fact that you aim with a fishing rod, and release the hook. Once the hook reaches the specified goal, he hooked on it and immediately will attract You to her.

How to use a Piton?
First You need to craft a fishing rod, and then taken her in hand. Aim at a certain point, where would you move and then press on the button — "to Catch", then you throw the hook.

According to the data which were taken from the Japanese source, mod Grappling Hook mod interacts with the Giant Zombie. Of course the mod Giant Zombie is not necessary to use,as an option.

Aim at the zombies and then click on the button — "Catch" to request a hook into zombies. This function works fine, this way you will be able to attack your enemies, dealing damage. 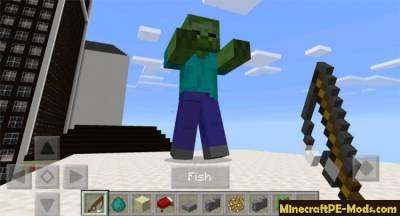 Review:
To make it more clearer how it actually works mod we suggest You to look at a brief overview of fashion Grappling Hook.

This mod certainly could be called something else. But since the mod was found in another Japanese site — the name of this fashion in English given a Grappling Hook. When we translated the title from Japanese fashion, lost all meaning, so here's what came from the title.