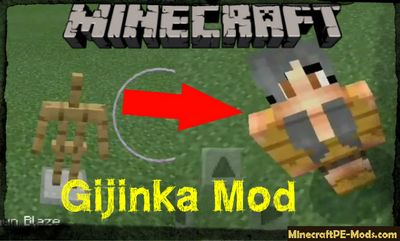 Have you been dreaming about a girl or wife? This addon will add a new feature to turn mobs into beautiful girls in Minecraft PE. Just use nametag in order to turn the first mob in the girl.

Depending on what mob you have transformed, and so this will be your result. For example, if you turn Ender dragon, then the result will be a beautiful magician girl.


1. In order to turn a Mob into a girl, you will need to get as close as possible and hold in your hand a new item that has the appearance of a nametag. If you have an iOS or Android device, after approaching a sufficient distance - there will be a special button "Transform", clicking on which there will be a transformation into a girl.
For Windows 10 and Xbox owners, it's enough to get close enough and press the action button on the mouse or joystick.

2. After turning, the girl will automatically be large, so there is a new item that reduces the age of the girl, it can be found as redstone dust. The reduced girl can be increased by the reuse of redstone dust. 3. Every type of girl (depending on mobs) can be repainted in a different color using dyes. A total of 5 different colors are available for each type. 4. It is possible to give names to girls and wives. So you can create a whole family or a fun party at home. Use a vanilla nametag to create or edit the current name. 5. You can turn mobs into secret girls. They are very adult and perform any your command. To summon them, do the following: