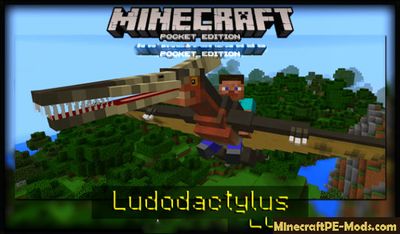 An excellent mod adds to Minecraft PE very ancient beings that once existed on our Earth is a flying dinosaur. They perfectly complement your world, because in the game there are very few flying mobs.
Dinosaurs will become your new Pets that you can feed the fish. In swap, they will allow themselves to ride and so you will be able to fly them.

Where to find?
New mobs are spawned near the cave or inside them. They have a growth cycle that allows you to see how young dinosaurs, and large.

To keep these creatures under control is very difficult. It's all for one simple reason - they are impossible to tame. All you can do is to feed the fish, to they were larger, and can tie to the fence with the leash. Thus it is possible to decorate your Kingdom, in which about towers flying dinosaurs. The mobs look really scary. Thus it is possible to cast the horror on all nearby monsters.