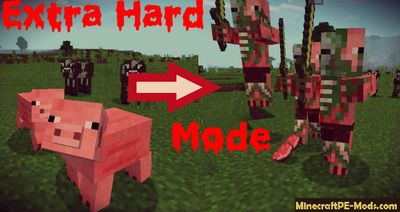 Consider yourself a professional player in Minecraft PE? But the Extra Hard Mode doesn't think so, because she is ready to present You with new challenges with which it will be possible to identify your real potential game experience. Are You ready to cope with these challenges and new obstacles? It will be about a game mode that can change thanks to the mobs of the game. So, if You play a huge amount of time in Minecraft PE, then this is for You do not pose a threat and danger, even on the last difficulty, and all because MCPE fully explored and memorized, each block, mob, and everything else.

What would the gameplay became more diversified and interesting, it was decided to add each mob a unique opportunity, a property, a feature, which previously were not.