If you like magic and battles in the game Minecraft PE then we recommend you to download Elemental Witches mod which adds in game 7 after all, and new magic items. Each witch has their own unique, magical powers, such as fire, water, earth, etc., Every time you kill one of them you will drop magic shards from which you can create magic staves.

How to find witches?

To call a witch, you will need eggs call that are easiest to obtain using mod TooManyItems by which to get them is not difficult.

Each of the seven witches is a real boss, with unique abilities and requires a unique approach to battle. After you kill any of them at the point of death you will find the pieces to create the staves.

The IDs of the eggs of appeal

The fire witch will be in their attacks use the lava to burn you. When she would have 14 units of health, she will create huge, fiery meteor, which will try to bring down on the head of the player and try to kill him. The witch uses in his spells and water attacks, so when fighting her be ready to Dodge attacks with water. When you leave her 14 points, she creates ice around you, which will significantly slow the movement of the game character. This witch uses the land that would strangle the player, and when you leave her 14 points, she will start throwing stones at you and call servants, which can only be killed with pickaxes. Creates large explosions and tornadoes that her health would be 14 units, tornadoes, and explosions will be much bigger and will cause even more damage. 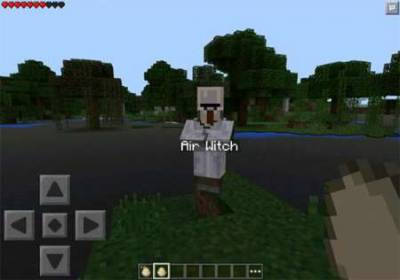 The Witch Of Light

The most harmless of all the witches, which will bring copies of her health will be equal to 14 units and below. The Witch Of Darkness

One of the strongest witch, her attacks deal the player a lot of damage, and when health drops to fourteen units, she would summon near you one random mob. The Witch Of Storms

The witch attacks the player with explosions and fire, and when you will finish it and it will remain 14 points of health, it will create around itself a number of lightning. 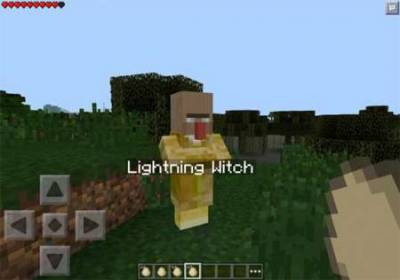 The IDs of the shards


How to make staves?

Every staff to require a minimum of 3 sticks and 2 fragments. With each type of shards, you can create a certain sword and you will not be able to cross different shards.

The IDs of the staff and recipes

What can staff do?

Some staffs will have a new button "Use", clicking on which you can release the fireball and the like.

Staff of fire: Shoots fireballs that set fire to the countryside. Rod of water: Shoots some kind of balls that create water after a collision with the surface. Staff of earth: Shoots into the air a missile that creates a few blocks of dirt in the place of his landing. 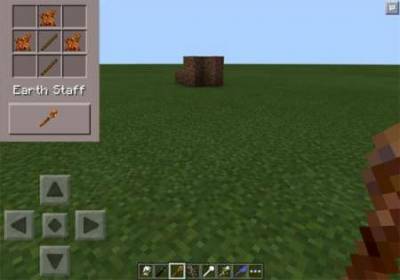 Staff of light: Restores your health to maximum.

Staff of air: Creates a small explosion near the mob, after which he flies into the air and explodes. Staff of darkness: Fires a deadly ball of darkness that explodes and deals massive damage. Wand of lightning: Calls lightning from the sky. 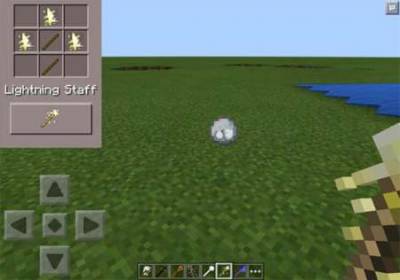