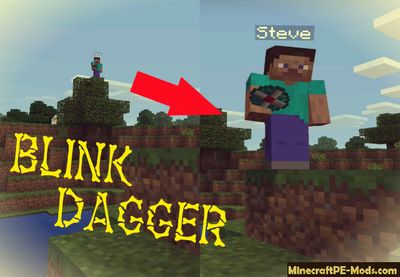 This mod will add in Minecraft PE dagger for instant teleportation to the specified location. Such a dagger could be seen in the movie "Prince of Persia: the Sands of time" or in-game Dota 2, in the second case, it was called Blink Dagger.

With such a powerful magical object you can effortlessly overcome the most difficult parts of the map. For example, a millisecond to climb to the top of a mountain or jump over a deep canyon.

How to get?
Nothing complicated you do not need for to get this magical artifact. It will replace the normal Ender pearl, and the crafting recipe will remain the same.

If you play MCPE a long time, perhaps the game became for you slightly slow but with this item, everything will change dramatically.