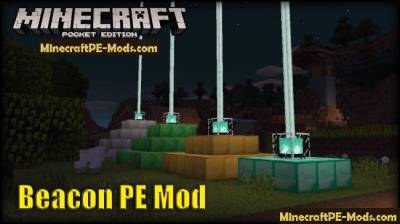 Beacon will distribute on a large and small radius effects that you specified in "configuration" of the lighthouse. The radius distribution effect will depend on the scale of the structure (the pyramid). More later ...

How does it work?
The first thing You need is to extract the Lower Star of the World. It can be made using the crafting recipe with the available tools or to get in your inventory creative regime. If you play in survival mode, then use the mod Toolbox.

Then when you have created a Star of the Lower World, you can proceed with the development of the Lighthouse.

After the lighthouse was constructed, go to the next step. You need to make a special platform, which will host the lighthouse. The platform should look like a pyramid, except the lower platform, i.e. the height of one block. To construct the platforms, take the following blocks: diamond, emerald, gold and iron. To have access to all possible effects, the design should look like this: base - 9 x 9 blocks; the top 7 × 7, 5 × 5, 3 × 3 (total 164 units) and on top of this unit.

In our example, we have done all types of structures at the upper base of which is placed a lighthouse. To help you understand the largest design has more available effects and apply these effects to a range of 50 blocks. For the design with one block radius — 16 blocks, then the design of more — 24, 32 blocks, and for the largest design radius distribution effect, as we mentioned earlier — 50 units. It is worth considering that the radius of the distance of the player from the pyramid also includes the height coordinate (Y). How to get the effects?
Once you have determined on the design of the lighthouse — click on it. After that, You will see a graphical user interface. The interface is pretty docile menu, which is divided into convenient blocks. The first block — "Main effects", the second block of "Additional effects"