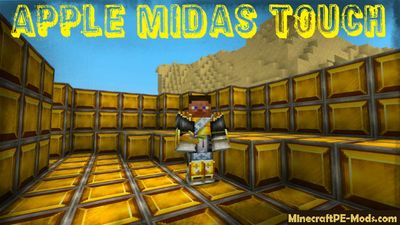 Apple's Midas Touch - this is a modification, with which you will get a magical power which can turn mobs in Golden armor.

However, to obtain such skills, will have to prove the fact that you are worthy of becoming one of the first magicians in Minecraft PE.


Here is the order of the ritual: put on a Golden breastplate, take the enchanted Apple in the active slot, release the front of the Silverfish, and then kill her.
Sacrifice allow the magic to come out of Apple that will provide you with a full set of Golden armor. And this is only part of that mod. So, there are two types of eggs, from light to dark, depending on the time of day at which the active mob in MCPE. To absorb have to be dressed in the armor, otherwise nothing will happen. You will see the explosion and then will notice that the inventory had extra egg to spawn, which can be used to release the Mob in any place convenient for you.
| Tags: