Unexpectedly for the developers around the world have released the first build of Minecraft PE 0.15.0, and a little upset many players, but at the same time pleased. So, in order to understand the essence of this update, or rather the first build, you should read this article!

Mojang has introduced a new policy in respect of his creation and decided to release the first build 0.15.0, in which she added only a new technology Realms and changed the inventory button. Please calm down and wrap yourself and other players. This is the first build, not the release of the full version! As we understand it, the upgrade test will be long and painful! And all because developers not only have to fix bugs in the Realms, but to focus on new content in the game. The point of this technology lies in a single phrase: "the server for family, friends and other small groups of players.." 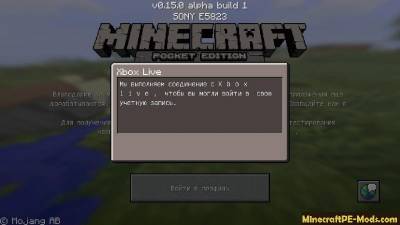 Doing the same thing his friends and acquaintances. Then, the player creates their own server for a small real money. It is unknown how much it will cost for PE/W10, etc. After that you can invite to your server players, as well as control them to create their own rules and stuff.. Right now you can help test Realms, their free creating servers and playing with other players. Be warned that there may be bugs, errors and stuff, because it's raw crude build. You can see how poorly done the text? And it seems there is a bug with the clouds.

Now, about the content! Where the rams, horses, new mobs, blocks, features? All this will be in the next builds! That is, 0.15.0 testing has already begun, just that it will be more difficult than before, because the meaning of Minecraft is not only survival and resource gathering, and to do it together, so Mojang want players to unite into small groups so they could enjoy the game with your friends without any established rules on larger servers, and probably donation.