With regards to the new office, then there is something to be proud of! Now with version 0.12.1 Minecraft Pocket Edition will have the opportunity to squat and sprint on the PC version of the game. At first glance the controls seem awkward, but eventually you will get accustomed to it. Now a Crouch button instead of the jump button, and jump button is on the right side. There are nuances of course management, this applies to jumping and flight. When you play in creative mode to fly up you need to click on the right jump button twice to fly, and then the Crouch button will disappear, and the button jump/flight, you will control the height of flight, and to sit down you need to press twice on a key squat.

But the developers have left us to the mercy of fate and added in the settings option in the Coca of the screen to place the button of the jump/flight and what the Crouch button. But also in the settings you can choose auto-jump if you will be uncomfortable to use the new gamepad. But that was not the end! The developers of the earlier version (0.11.1) added in game effects from the potions, but the potions are not added in this version - Minecraft PE 0.12.1 would have not only effects, but also will be cooking a rack where you brew potions.

But to brew any potion you will need ingredients that were added to the game! What is the importance of hell in the preparation of potions!? It's very simple, to make cooking a rack you will need a rod which you can get only by killing the Demon. Then the next ingredient, which is just necessary to make a marching potion on the basis of which you can already prepare potions heavier cooking that will have any effects - it atsiki outgrowth.

In 0.12.1 you will have the opportunity to enchant tools and other items ... What is the weather in Minecraft Pocket EditIon is already quite a long time we all waiting for weather, which would have diversified the game ... but it all did not add. And it has happened ... the developers added in Minecraft Pocket Edition 0.12.1 weather, which will have a different nature in different biomes. If you in the ice (snow) biome, where winter dwells, in cases of precipitation in the winter biome will be snow, and in more temperate climates will rain. But the weather can change just like in real life instead of a rain to snow or Vice versa. 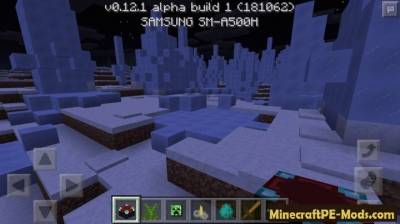 And in 0.12.1 got the long-awaited Ocelot, flower pots, new sounds, Golems, and new types of boats (depending on type of tree) and much more ...