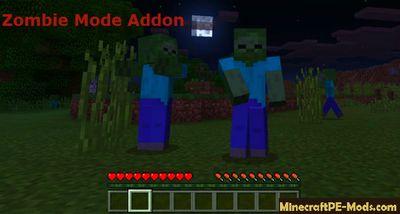 You repeatedly wanted to go as a mob? This Minecraft PE addon will transform you into a zombie. Like on servers with zombie mode, you will survive, just like the monster itself: to go out only at night to attack the villagers, fed orphaned meat, etc.

Features
First, find a quiet place in the dark, for example in abandoned house or cave. Since the sun can kill you in seconds, you will need to wait for the night. Power of the Night is only in your hands. Kill everyone you see, and stock up on meat.

Survival along with the other monsters a lot easier. Keep holding of flesh to other zombie moved followed you. Thus you can do raids on nearby villages. The more you collect allies, the faster you get to defeat enemies. Sometimes the village can be guarded by a Golem, but it's not a problem for you because your vitals will grow significantly, especially heavy damage from the punch. Now instead of diamonds, your jewels will be the villagers. They will be an excellent source of food or soldiers in the army.