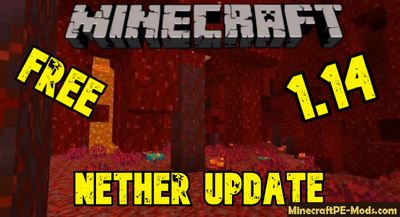 Minecraft PE v1.15.0 - is a new global update for Android which is called the Nether Update. In MCPE 1.15 added a huge number of features for Nether World, now there are new biomes, new nature, unique mobs, more resources, added blocks for Redstone mechanisms and arrow activators, etc. Download the new Minecraft Nether Update and discover a new world of adventure that was not previously available.

You could watch the Minecon 2019 where the further development of the game universe was discussed, and also participated in the vote for the future update. As a result, it was decided to radically change the Nether World. The developers have prepared for this case a small preview, where the players were seen some features of the new update.


Features of Minecraft 1.15.0 on Android