On The map The End City you will find really cool creation that will allow you to visit in the Ender World. The edge is the peculiarity that exists in the PC version of Minecraft, but unfortunately not in Pocket Edition. So if you understand this real world is not quite the Edge, but only very well-designed model. The author of the map tried to show the essence of the world the Edge on this map, and every player who came at her, feeling something new.

How to play?
This map was created for Minecraft: Pocket Edition version of the game, which until that peace in the Region does not exist. It's actually a normal map, but its peculiarity is that it is built almost real dimension to the Edge — almost like a present.

After you appeared in the world of MCPE — it will be similar to the End Portal. The map also offers a special button with which you will be able to get potions, food and weapons. Go to the portal, which allows you will move lower in the fake world.

In this case, the Edge consists of one large island on which there is a town that looks like a giant purple trees. In island County there are lots of Endermens. Until you look them in the eye — they are friendly. 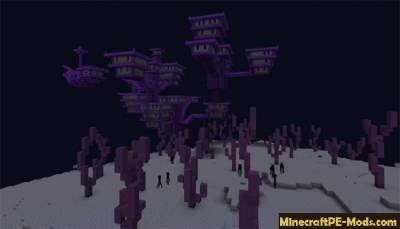 Recommended settings
To make the fake world of THE END is actually most similar to the real world THE END — we recommend that you log in to the map with the following parameters, which you should use in the game settings.