Map Hunger Games Arena Forest — this Minecraft PE map is great for PvP battles — namely the hunger games. The neighborhood arena is a forest. The forest is a great place for the game "the Hunger Games". In the forest you can easily hide, to fall on someone's tail, someone to hunt down, to understand the tactics of other participants in "the Hunger Games" and other details.

The map is recommended to play at least four. But it is better to play in more players — so much more interesting.

How to play the Hunger Games?
Map "the Hunger Games" can play up to 8 people. Each player must stand on the white platform, and not move until the game starts. Next, begin counting from 10 in the chat, then after the countdown, each player must run to the center of the map to pick up the necessary things and items from chests. Allowed to kill other players after one minute after the start of the game. The last man or woman left alive will be the winner.

Forest is and will be the playing field "the Hunger Games". In the forest you will encounter the chests in which you'll find useful items. 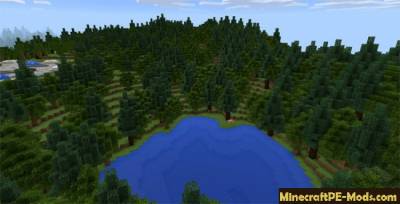 On the map there are many places which are really worth exploring. Map built in the old world, which is very comfortable — each player sees the map border, so no one won't get far! But you know, you can make the world infinite in map settings.