In Minecraft PE 0.15.0 will be horse riding and fishing rod with a carrot! I think many already know that the release of Minecraft Pocket Edition 0.15.0 we will see Horses and other innovation-related arrangements. But now not about it, and about horses and everything connected with them.

One of the developers of Minecraft Pocket Edition, namely Jason Major, shared a very interesting screenshots, which will interest everyone. In the screenshot below you can see how Jason is holding in his hand a carrot. It gives little, right!? The following screenshot shared by Jason is a screenshot of the main menu. The first thing that catches the eye — a splash! The splash in main menu — "Ride the Pig". Something emerges?! 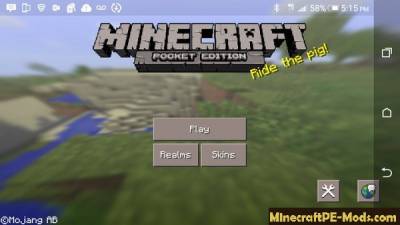 Further, the screenshot more interesting character, Jason, has shared a screenshot in which we see a pig wearing a saddle.What could it mean?! I think you all guessed it — in Minecraft Pocket Edition 0.15.0 will be able to ride pigs.

To ride the pig you will need to tame her a carrot, then click the saddle on the pig to equip it. Then you sit on a pig and ride it. The maximum movement speed will be 14,91 m/h (6.67 blocks per second). The pig can climb up on ledges with a height of 1 unit. Also, it is able to climb vines, but it requires some skill. If player change item in hand, the pig will be a few seconds to stand still and then go about their business. As mentioned before in previous posts, Mojang is officially stated that in 0.15.0 will be added to MCPE horse — and adding the ability to ride pigs, it is one more proof of this!
| Tags: