Recently the release of Minecraft PE 0.15.0 Alpha Realms — in this version was added only one Realms. That's what the beta is suspended — read about it in the next article.

One of the developers of Minecraft Pocket Edition — namely Jason Major posted on his Twitter page in the screenshot where we can see animals that have names (their names are "nicknames" glow over them).

With the help of tags it is possible to implement this feature is to give names to animals and mobs. What's very interesting about the tags. If in Minecraft PE 0.15.0 tag will appear, in fact will be the ability to trade with villagers, because to obtain the tag will have to bargain with the villager. 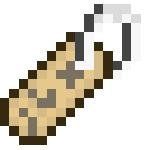 Also you can find it in chests, found in natural structures (e.g., treasuries) or to catch the bait.