We held a pre-release version of Minecraft Pocket Edition Build 4 0.12.1 in which the developers have fixed some bugs that hindered gameplay. Also, the developers have done in 0.12.1 Build 4 with some new innovations, and have also done optimization of some features that will make Minecraft Pocket Edition 0.12.1 to a certain extent more stable. And so with each release of the preliminary version 0.12.1 we'll see something closer to final release 0.12.1.

Let's look at some changes that we expect in Minecraft Pocket Edition Build 4. First in the inventory of creative mode now has a enchanted book that allows the player to store the spell and later apply them to selected objects: weapons, tools or armor.

Enchanted book can be obtained by enchanting a simple book on the enchanting table. It looks like a brilliant book, tied with a red ribbon. 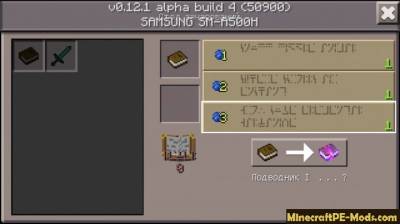 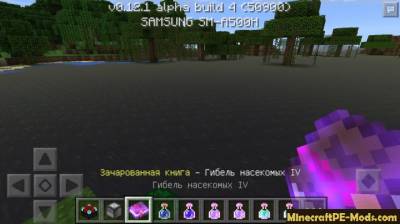 Here is the screenshot of all available enchanted books that you can use for magic in Minecraft Pocket Edition: Also now with version 0.12.1 Build 4 in the world there are two new long-awaited recipe crafting: the ability to create in the workbench Golden Apple and enchanted Golden Apple.

The difference between these two apples is great, when you make a enchanted Golden Apple you need 8 gold blocks and 1 Apple easy. The crafting recipe see below.

When you eat a enchanted Golden Apple you will get the effect quick regeneration of your health over 30 seconds, protection from fire, reduced damage to the player for 5 minutes and Absorption for 2 minutes.

Enchanted Golden Apple differs from normal in brightness that is typical for enchanted items.

Normal Golden Apple is 8 gold bars and 1 regular Apple. When you eat a Golden Apple your health will be restored in 4 seconds.

Since version 0.12.1 Build 3 interface is no more free space. Also in the game added a function error when connecting to servers that are on the old platform Minecraft Pocket Edition!