What's new? The first thing that caught the eye is slightly changed interface worlds. In the main menu Now worlds no tabs "worlds". The tab "worlds" has been removed from the menu.

Another very interesting innovation in Minecraft Pocket Edition 0.17.0.1 is a new graphical interface. You can also use old interface of Minecraft PE, but if you want You can switch to the classic GUI of the game. To do this, go to settings minecraft 0.17.0.2, click "Show advanced video settings", select "the profile user interface", then "classic". Now Your GUI will be the same as the PC version of Minecraft. If you wish, you can return everything to its original position.

The advantage of this kind of type menu that now there is a search box with which you can easily find among all the blocks and items necessary items. For example we searched for: "pickaxe", as a result, we found all the available picks.

If you type in the search: "woo", we will find all the elements that begin to woo. They attack not only players, but also any other mobs that randomly attacked them.

They swim faster than the player, so it is difficult to escape them if they attack the player.

Polar bears attack getting up on their hind legs and tearing of the player with its front legs. Next cool innovation was the wings ! It is also a feature of the PC version of the game, which came in pocket Minecraft version 0.17.0.1. Thanks to the lockers you will be able to easily float above the ground. The main thing that was of higher elevation, then epic and breathtaking flight above ground will be guaranteed. To test it's wings, you need to get them, and to put on instead of the bib. Then find a small tree from which you could jump. Once you pushed off from the tree you start to fall, at this point press again the jump button to activate wings. Then you will slowly start to soar/plan above the ground, slowly sinking down to the ground. The greatest advantage of these wings that you will not take damage upon landing.

And now about the main thing! The main innovation of Minecraft 0.17.0 — Ender Biome, the Ender dragon and all that is connected with the measuring Edge. To get the edge You need to find a portal through which you will get to the Edge. Portal you can find in underground fortresses. To simplify the search, go to seeds on our website or use the eyes of the Enderman.

When you find the portal, it will not be activated. To activate the portal, You will need 12 eyes of the Enderman. On one eye you need to arrange 12 blocks (the Frame of the portal Edges).

After you put the eye of Enderman in all 12 blocks — portal is activated. Boldly jump into the portal and teleport to this new, incredibly amazing Ender dimension. In the Ender dimension as a rule you will meet a lot of the Enderman, the main Boss of the Region — the Dragon, the Ender of silverfish and other nice innovations that you already consider yourself! 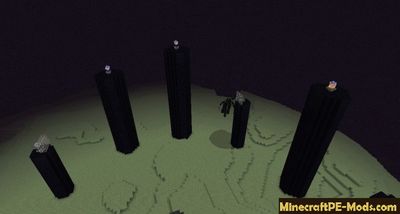