This .McAddon adds a space rocket and astronaut costume, which is able to overcome the vast distance in space. Using addon in Minecraft PE, you will be able to reach nearby planets or satellites such as the moon. The spacecraft will provide an opportunity to fulfill their dreams associated with space exploration and everything else that is connected with the cosmos.


In order to get a rocket, you will need to descend into the Nether World, because it replaces Blaze or use the eggs to spawn this mob. The size of the rocket is not large. For this reason, you will be able to build a small spaceport to fly to the moon. Gaining height quickly, and quickly changes course in flight. 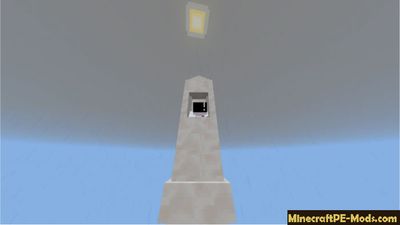 To sit down at the remote control, you will need to move closer to him and press the following:

The exterior looks like those missiles that were often shown on TV back in 50-60 years. Our spaceship has a porthole where you can watch the whole process of flight. Use the flask of witchcraft to fill the apparatus. To manage it, use a fishing rod with a dangling carrot - it icon will be replaced.