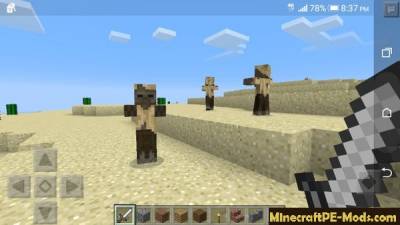 On the eve of the release of Minecraft PE 0.15.0, we received more news about her future implementations.

This time one of the developers — namely Jason Major has shared on his page on Twitter a screenshot of a new mob — mob Sandy, which came from recently Minecraft in 1.10. If you've read prior articles, you could see this zombie.

New zombies when you attack will give you the effect effect of famine! Apparently this type of zombie will be generated in desert biomes.

And as you can see in the screenshot — sand zombies are not afraid of direct sunlight, so they can safely walk day.