The emergence of new mobs in the world Minecraft PE is something special, if it's some sort of unusual mob or animal.

Water Dungeon mod adds in the world Minecraft Pocket Edition new Moba from the PC version of the game - Guardian (Curator). Guardian is an underwater creature that is essentially hostile. Except it's not attacking you, unless it has some special effects when he napasti.

At the moment the creature is not sravnitsa under water yourself so you need to spawn him by using Aysa to spawn this mob. When to hit the Keeper it produces a thick ink, and then quickly swam away. 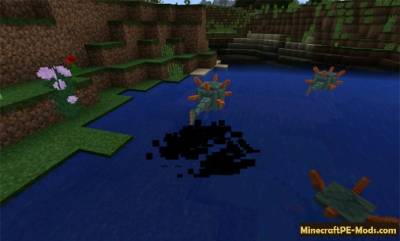 How to install mod Water Dungeon?: