TerraCraft is a full addon, which contains a huge number of new mobs, tools, weapons, ores and other innovations from Terraria.

TerraCraft will give you the opportunity to immerse themselves in the world of adventure in Minecraft PE, because now you have to look for new ore to craft new armor. New armor much stronger than the standard and has such magical properties, like the main character from the game Terraria.


Mod is able to replace almost all hostile mobs on the characters and mobs from Terraria. If you are more or less familiar with the gameplay of this game, then you can easily understand what items fall and which of them can be crafted.


What about the specifics, I can say that have been replaced or changed the following mobs: 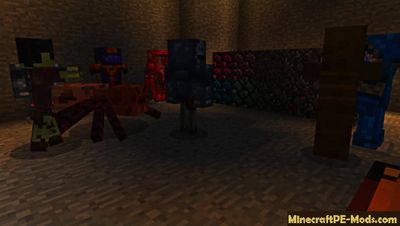 
Now you will be available to craft 4 full set of armor from new ores. As you already guessed, the author of the mod has replaced all that is connected with iron, gold, emerald and diamonds on a brand new ore, or rather the gems. Get them as hard as in the original game.