Redstone mod for Minecraft PE will allow you to create very complex mechanisms, which can operate automatically or by pressing a button. Thanks to this mod in the game Minecraft PE you can make an automatic trap, automatic doors, fuses and more. The scope of the mod Redstone limited only by your imagination and will allow you to create any mechanisms that will be useful in the game Pocket Edition. The first thing we want to show you, this is a simple design that will be a sticky piston and a switch. By clicking on which will appear a column of the fence. This mechanism in principle is not complicated and pretty useless, but maybe he'll come in handy. 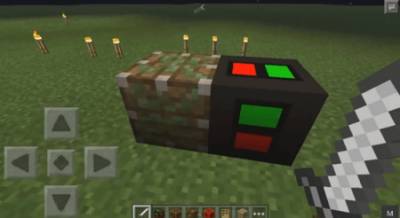 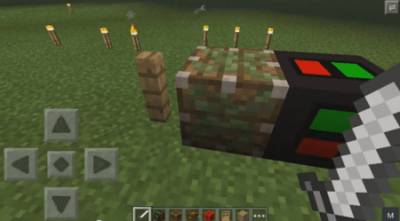 Now let's look at a more complex and more useful mechanism, which will consist of a switch and a few blocks of Redstone. Once you press the switch, the normal Redstone to turn into charged, it may be useful to you, you will learn below. 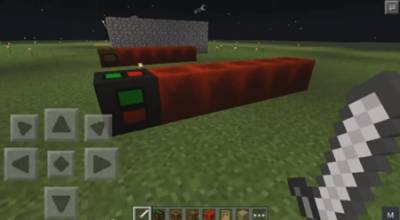 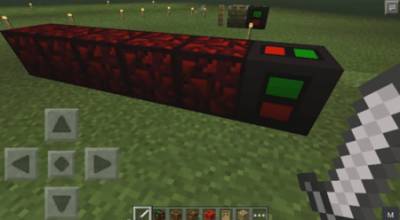 Once you already have the above structure, in the end, you can set a block of dynamite (TNT) and when you press the switch you activate it and it will explode. It will look like, look at the pictures below. 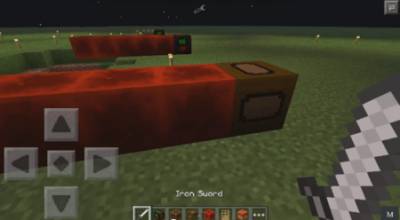 Further we will consider the design in which you will be using pressure plate. In this design, pressure plate will work in design with entrance doors. With this button the door will open and close automatically, which is pretty interesting. 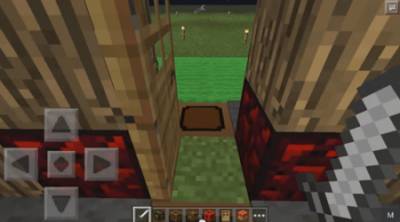 If you liked this mechanism, let's look at how you can do it. For this we need to have a metal plate and two sides to impose its Redstone. Then set the door directly in front of pressure plate and eventually you should get the following design. After you install this way, as in the picture above, put another pressure plate behind the door and we would get construction of 8 blocks of Redstone, doors, and two pressure plates. Once you tread on one plate, the door in front of you will open, after clicking on another plate, believe will close behind you. The following mechanism will also be sent automatic opening of doors, only now it will be used not pressure plate, and the button and switch. 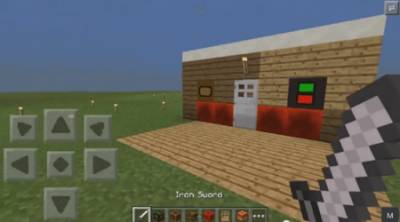 If you press the switch, the door will open and will remain open until such time as you do not click on it again, but on the other hand. When you press the button, not to be confused with the switch the door will open automatically, but will be in this state only a couple of seconds, so you have to quickly run into the house while it was closed. 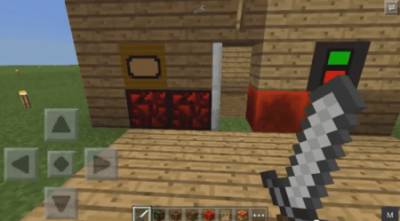 Now consider the last and the mechanism that you can do with this mod Redstone for Minecraft PE. This mechanism will be a trap. This option will use the button that will be hidden under the rug, every time you press it, a trap will be triggered. Above we discussed the variant with the pressure plate, and now let's consider an option with a switch. In this case, you can press the switch and the trap will open after you click on it, it closes. 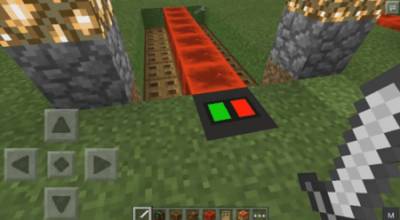 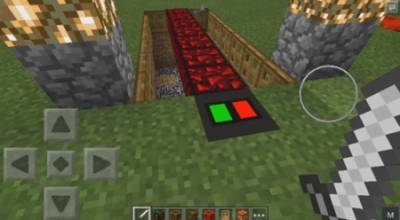 Well, now you can download Redstone mod for Minecraft PE 0.10.4 and 0.10.0 and apply these mechanisms in your buildings or for your own needs.
| Tags: