This Minecraft PE modification is intended for those players who wish to see in the game some creatures from the modern world. After installing the mod, you will be able to see the new aquatic animals that are very friendly. 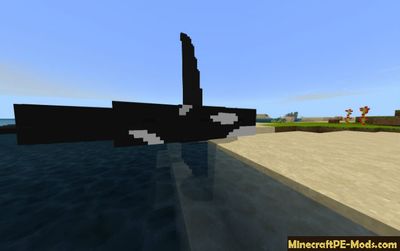 
Let's start with the fact that the new mob in Minecraft PE is not the biggest animals as inferior to the Ancient Guard. The addon did these inhabitants of the oceans is fairly friendly to players, in the sense that they will not attack first. Unfortunately, you can't interact with them. It is worth noting that, once on land, the mob dies in 30 seconds, so try not to spawn them on the shore, because shoving such a giant in the water will be difficult. After the death of the animal drops a lot of loot, but mostly fish.
| Tags: