Very unusual weapon adds to the game a Crazy Weapon mod for Minecraft PE. Such functions do not exist in any other things in the game and it's great.

Large list of new weaponry awaits the player as soon as he set Crazy Weapon. To get these weapons either in the mode of creativity-creating it, knowing ID of the subject or knowing the recipe for crafting.

Here is a list of all types of weapons, which will have the player installed this modification: This weapon fires real cookies. But they will not be able to eat, because it touched the ground, they detonate and explode like a small charge of dynamite. Looks fun and works perfectly in any fights. 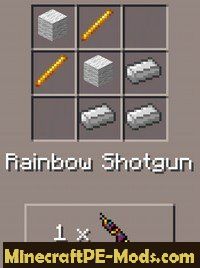 Rainbow bleed not just bears its name. He shoots the sheep, oddly enough. But even more strange is that, in the end, the sheep-projectile is transformed into a colourful post, something like a rainbow. Extremely unusual phenomenon. A sword with the properties of flight. But such a flight in the life of the mob will be the last, because after landing from a great height definitely mob dies.

A weapon that creates in the practice of the ghostly guard. It is designed to help the player, because it is always near him and attacks hostile targets. The sword is focused on chickens. It eliminates them, but with special effects. Attacked a chicken disappears, but instead in the air there is a lot of chickens and they explode after a short time. Beam weapon that emits a special beam that burns through everything in its path, except the mobs.

Freezing sword acts exactly as its named – it freezes its target. In this state, mob cannot attack the player, nor to flee. This weapon is similar to a frost sword, but instead of ice falls victim to a bunch of lava and burned it. An explosive weapon that causes as a result of his exposure to a lot of ocelots, but in place use a good funnel. Fire bomb ignites all around. Powerful weapon, if you were surrounded by angry mobs, and you need to survive at any cost.
Weapons and it looks unusual and has extraordinary features. Thus Crazy Weapon mod for Minecraft PE 0.14.0 adds really unique items that are very fun to apply in practice.

How to install mod ?:

How to install texture pack ?: