Weaponized Atlas Robot — this map was built the most modern and advanced robot that we have ever seen in Minecraft PE. The robot is fully automated, and while walking he shoots fireballs. The robot is fully powered by Redstone. The design of this robot is very simple, but at the same time very reliable. This robot will be able to harrow you from the evil zombies, which, as usual will try to hurt you.

Next, go to the front of the robot and using a flint lighter, hit her on the block the observer to activate the robot. 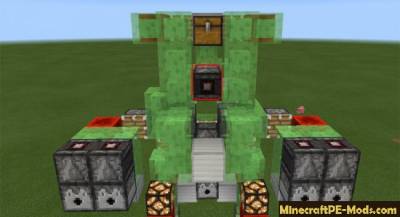 The robot will go and shoot fire charges at the same time.