Secret Observers is an information map on which you can learn more about the observers and the pistons that were added in Minecraft PE 0.15.0. This map is quite large scale, but nevertheless useful if you want to study in detail the functionality of blocks: observers and pistons. Just make sure that you are playing on a map with the minimum the game version of Minecraft PE 0.15.0 and above..

Basically the block-the observer records all changes that occur in front of him. Once it detects any changes — he delivers the Redstone signal. As you can see in the screenshot below, when a block of wood appeared in front of the observer, he was activated, and the lamp behind him activated as well. Lamp illuminates after a few seconds after the detection unit observer bloc.

Block the observer has many different possibilities —it all depends on your imagination and skills to create something. For example, you can build stone generators and hidden doorways. 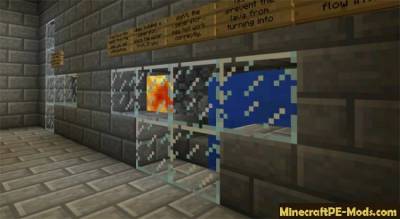 Installation of the map Secret Observers: